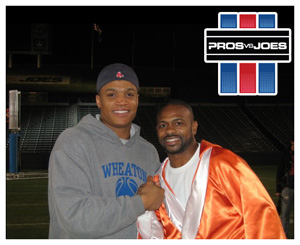 Did you ever see that show where they take regular Joes and put them up against real Hall of Fame athletes? Yeah, well I am the guy from Boston that won that show in Season 2. Now before you mistake this as a random, trash talking rant, consider the fact that I know my strengths and everyone…I mean EVERYONE knows I throw a baseball like a 10 year old girl. Well, not really. Certainly there was some editing involved in making me appear as pathetic as possible but this is not what this diatribe is about.

This is a about why I started this company.In the aftermath of my appearance on Pro’s vs Joes, a college buddy of mine convinced me to start a sports apparel company. It’s not exactly the kind of thing that comes up over coffee so I will curtail the non-essential elements of this story. We literally started this company out of my garage. Unlike Bill Gates who was worth about a bazillion after a few months, I had quietly amassed a few thousand headaches, lots of bills and a buddy whose professional job status was in jeopardy, so he bailed. All that was left was me and a few dozen boxes of shirts.

In the aftermath of my friend’s exodus, I realized that in order to recoup my initial investment, I would have to spend my way out of it. Things were looking rather suspect. I worked in a suit and tie during the day as a Regional VP for a large Brokerage Firm, and by night I hit the streets in jeans and a premium hooded sweatshirt as seen on this site hocking t-shirts. I must admit, I wasn’t too confident that I had done the right thing. Never the less, I incorporated my brother and a rotating cast of my younger siblings to wave t-shirts on the streets of Boston.

Then something crazy happened, the shirts we were selling started to find an audience. Before long, stores started to approach us and our first retail accounts were opened. It’s not like we were “Life is Good” and our positive message appealed to everyone; our product spoke to die hard sports fans that were a tad more cerebral. Now, one would think that a savvy business guy would start by launching a website to sell their products first and foremost. That made way too much sense so decided to continue digging a ditch with a spoon.

After 2 years of ditch digging, we are finally proud to offer you an alternative to other sports apparel sites, ilovebostonsports.com. Let’s just say that we spent all of our creative juices on the designs and not the name of the site. I promise you though that everything on this site is completely original and something unlike any other sports apparel site. Although we don’t offer licensed sports apparel, we can say without question that our products are much more inspiring. We pride ourselves on creating fun, quality apparel and designs that not only speak to Boston Sports Fans, but can be appreciated by anyone that enjoys quality art. We hope that you like what we have as it is truly a labor of love.